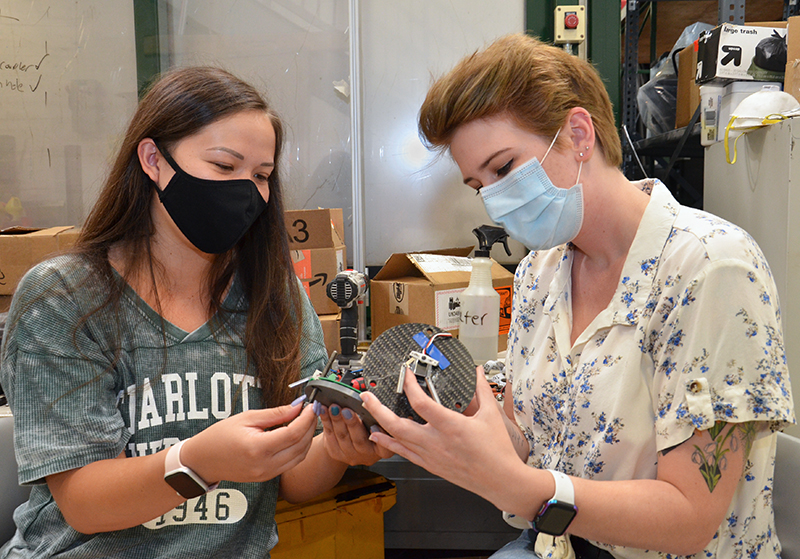 A tradition has been growing on the Forty Niner Rocketry Team, in which female students in the ETCM program recruit fellow ETCM females for the next year’s team. The 2020-21 team has Cortney Hahn as its third generation ETCM student. Cortney was recruited by Tyler Ainsworth, who is now an Applied Energy and Electromechanical Systems master’s student, from the 2019-20 team. Tyler continues to show her support for the team, mentoring Cortney and helping this year’s team with the making of precision carbon fiber components.

Part of the NASA Student Launch competition, the UNC Charlotte Rocketry Team has a been one of the most successful teams in the country for the past decade. Both Cortney and Tyler have been Recovery Officers for the team, which means they are in charge of making sure the rocket comes down safely in one piece. 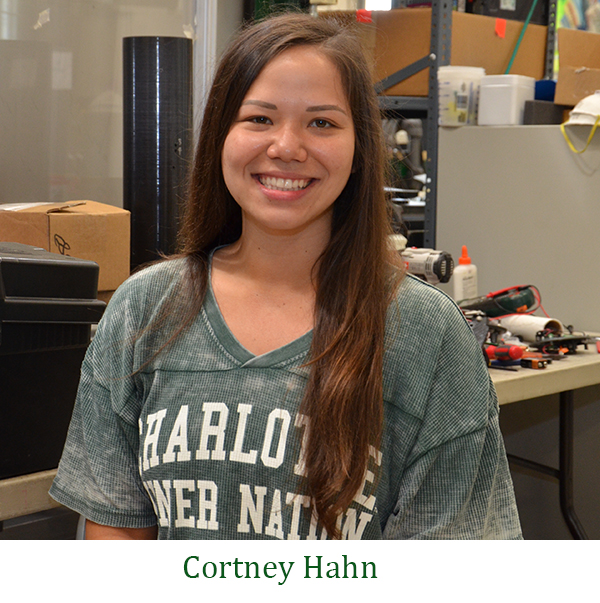 “I knew Tyler from ASME (American Society of Mechanical Engineers), and she recruited me for the team,” said Cortney, who is a senior in Mechanical Engineering Technology. “She told me the team is a lot of work, and it has been. Since I was following in Tyler’s footsteps, she helped me out at the beginning with a lot of the basic things, which allowed me to get a running start. We are a small team and we all have to do a lot of jobs and work together. It is cool to see everyone participating. And it’s fun to see all the pieces come together.”

Tyler said she also initially got involved with the Rocketry Team because of a fellow female ETCM student. “The person who recruited me was also a girl from MET,” Tyler said. “We were also a small team, so all did lots of things. As the Recovery Officer, I worked a lot with the vehicle team building the actual rocket. At the same time, I was working for Dr. Williams in his Magnetic gear lab, where I learned to use a laser cutter and water jet. The water jet worked out really well for cutting carbon fiber parts that can create a lot of dust if done in a traditional machine shop.”

Tyler continues to help out this year’s team by cutting carbon fiber parts for them. “There are actually a number of alumni who like to come back and help out,” she said. “The team has a strong tradition of success and pride, and everyone wants to see that continue.”

For this year’s competition, the Rocketry Team will do it launches on its own, and then submit results to NASA for judging. The final rocket launch will be April 24th, and judging will be completed in June.